Mentalism is a performing art in which its practitioners, known as mentalists, appear to demonstrate highly developed mental or intuitive abilities. Performances may appear to include hypnosis, telepathy,clairvoyance, divination, precognition, psychokinesis, mediumship, mind control, memory feats and rapid mathematics. Mentalists are sometimes referred to as psychic entertainers.

We work with one of the best Mentalists in the Midwest! 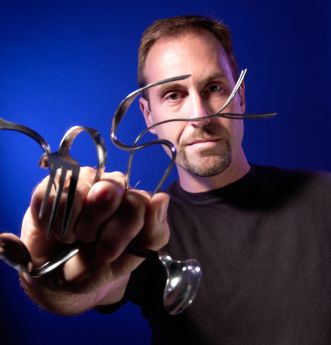 Christopher cannot see a thing! You made sure of that when you and several other audience members placed a large coin over each of his eyes and covered both of his eyes with multiple layers of duct tape so that he is completely blind. Yet, without missing a single detail, Christopher just told you exactly what is in your pockets. A minute ago, he provided the audience with an intricate description of an object that a man was holding. Just before that, he stunned the crowd when he told a woman what was in her purse, including the specific compartment where each item was located. Next, he is going to leave you scratching your head in amazement when he begins to reveal the detailed thoughts of dozens of people in the audience.

Christopher has just demonstrated why he calls the human mind “the last great frontier.” Christopher takes his audience – not just as observers, but as active participants – on an interior journey that explores the mysteries of the mind. You can see and feel the sense of empowerment that the audience experiences when Christopher causes a light bulb, which you purchased, to suddenly illuminate in your own hands. You can share in the wonder and amazement when an envelope that you have been guarding for weeks is opened to reveal a detailed description of how a randomly selected audience member will be dressed.

For two decades Christopher Carter has been thrilling corporate audiences in every corner of the nation. Each presentation is customized to the specific needs of the client and the event. Equally at home in an intimate gathering or before a large audience, Christopher has created outstanding presentations for Sales Meetings, Customer Appreciation Events, Awards Banquets, Team Building and Leadership Retreats, office Christmas and holiday party events, and many more.